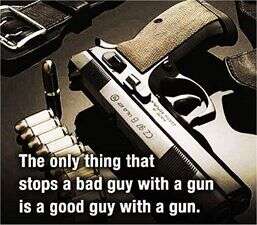 The Gun Fight on the CBS46 FB Page

I heard all the preparations about how CBS46 was tackling a “hot button” issue and that tensions are high on both sides, but they wanted to present both sides of the debate equally.  OK, they failed miserably on that point. Because they spent a majority of the time talking emotional issues and not issues related to guns.

I agree that what happened to April McConnell is a tragedy, but the fact remains that her husband WANTED TO KILL HER! If through some mechanism we could replay that terrible night, and remove the gun from the story, the incident still would have happened, but the weapon would have been different. When someone WANTS TO KILL another, it is not the gun that is the problem, it is he person and even if there is no gun, there WILL be a weapon and the attempt to murder WILL occur.

The couple whose son was shot from behind by someone got their story correct–and the hosts tried their best to change the subject when the mood turned pro gun–NOTHING would have saved him from this murder because the murderer sneaked up on him from behind.

I found all the emotional stories of kids getting killed to be particularly upsetting because they basically fall into two very broad categories. The first I call “Collateral Damage” because the the kids were NOT the intended targets, but a speeding bullet knows nothing of an intended target. The second broad category I call “Accidental Deaths”. In this category I lump kids “finding” a firearm and shooting themselves, one of their siblings, or friends and we have heard plenty of these stories in 2015.

On the 2nd group, I do have a solution and I have evidence that my suggested process WORKS! Today we teach kids that guns are evil and bad, but we DO NOT TEACH THEM ABOUT HOW TO SAFELY HANDLE ONE! Consequently, WHEN–and yes it is going to happen–a kid finds a weapon, he/she has NO IDEA of what to do or even how dangerous it can be! EVERY KID IN EVERY HOUSEHOLD should be taught the 4 rules of gun safety for THEIR protection, the PROTECTION of their siblings and friends, and for the PROTECTION of the general public!

For the Record, the 4 Rules of Gun Safety are as follows:

1. ALWAYS treat EVERY gun as if it is loaded! See the following 3 rules to understand how this is accomplished!

4. ALWAYS check to be CERTAIN of what is BEHIND your target before firing! Your bullet may go through your target and keep on going so you may be about to shoot something or someone whom you were not intending to shoot! You MAY MISS YOUR TARGET! Even with all the practicing that I do, I do occasionally miss my target too. This is for EVERYONE, but especially for those young men and women who think shooting out of a moving car of shooting into a crowd is appropriate! MANY people are injured or killed because some IDIOT has a gun and chooses to fire indiscriminately in a direction with NO REGARD for what is behind the target you are shooting at!

Had the following kids been taught these 4 rules of gun safety, I would likely not be in a position to relate their stories in my blog tonight!

The Lithonia kid who found a revolver in the woods then shot and killed a 13 year old sibling.  He broke all 4 rules of gun safety!

The 13 year old girl who found a loaded gun in the sofa, would likely be alive today had she been taught the 4 rules of gun safety because she would not have pointed the weapon at herself!

The list goes on, but the point is well made. Teaching kids about the 4 rules of gun safety and the proper operation of a gun MAY have saved MANY kids in 2015!

In many of the comments made by those in the studio, the point was made repeatedly that to teach the kids, the ADULTS must first KNOW the 4 rules of gun safety! Knowing that may also have prevented some of these tragedies because that gun may not have been in that sofa. That revolver may not have been in those woods. When a parent or parents SHOW responsibility, the kids LEARN responsibility!

I have NEVER had to use my firearm as a weapon, and hope I never have to.  I believe my training and practice will give me an edge should that time ever come.  Until that time comes, I will not know exactly how I will react. I can predict and I can believe, but until the specific scenario happens, I will not know for certain!

I willingly accept to TEACH people how to safely use a gun.  I will go to the range and walk someone through how to load the magazine, how to install the magazine in the gun, how to operate the gun to load a round into the chamber in preparation for firing–this also cocks the firing mechanism so that the gun will shoot when the trigger is pulled.

When accepting a new shooter to teach I provide a printed copy of the 4 rules of gun safety and the description of the meaning of all 4 rules to my new shooter. UNTIL such time as that new shooter can–without the aid of the printed copy–tell me the 4 rules of gun safety in the proper order AND tell me the description of each rule, I WILL NOT go to the range with that new shooter. The 4 rules of gun safety are necessary for the safety of the new shooter, for the safety of everyone else at the range, and for my personal safety.  Should my new shooter violate one of those rules, we pack up and leave immediately.  I want my new shooter to understand that when talking about guns, there is no “reset” button.  When you pull the trigger you cannot recall the bullet like you can some Email systems.  When you pull the trigger on a gun, whatever the muzzle is pointed at when the firing mechanism discharges the round in the chamber, will be hit by a 115-230 grain projectile moving at somewhere between 850 and 1,300 feet per second for handgun rounds!  Rifle rounds can be lighter or heavier, and travel at speeds in excess of 3,000 feet per second! (1,100 feet per second is generally considered super sonic).  If you shoot at something you were not intending to, it is likely the bullet will hit before the person or animal hears the gun go off!

As I have repeatedly said in my post, KNOWING and FOLLOWING the 4 rules of Gun Safety will go far in reducing the number of accidental deaths by firearms!

When you pull the trigger on a gun, whatever the muzzle is pointed at when the firing mechanism discharges the round in the chamber, will be hit by a 115-230 grain projectile moving at somewhere between 850 and 1,300 feet per second for handgun rounds!  Rifle rounds can be lighter or heavier, and travel at speeds in excess of 3,000 feet per second! (1,100 feet per second is generally considered super sonic).  If you shoot at something you were not intending to, it is likely the bullet will hit before the person or animal hears the gun go off!

Information and Misinformation About COVID and Masks

A Chipmunk and Squirrel Excluder That Appears to Work!